How To Make A Hydrogen Fuel Cell In 10 Minutes

First find a clear glass bowl, a jar or a glass with a wide opening. We will need to see inside the hydrogen fuel cell to understand what’s happening. Fill it three quarters with water. Tap water should be fine. Be sure not to add any salt because it will change the properties of our electrolyte.

Take the platinum coated wire (or the platinum wire if you are that rich), cut it in half and coil it by winding on the ink tube of a ballpoint pen or anything else. The smaller the diameter if the platinum coil, the better. These coils will be immersed in water but please leave some not coiled to stick out of the water 2-3 inch. 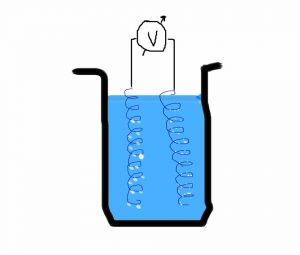 Attach to the not coiled peace of platinum wire some regular wires. 2 feet on each should be enough for our little experiment on how to make a hydrogen fuel cell in 10 minutes in our own kitchen. At the end of the wires place the voltmeter. You should have similar to my drawing. Sorry for my not artistic taste of painting.

Our hydrogen fuel cell is ready to produce electrical energy.

Remember where you placed the hydrogen which I told you to have, in the beginning of my article. If you don’t have it, you are in luck. I will tell you how to make some, easy.

So, with a small perfusion hose (sorry I forgot to tell you to have it too) take some hydrogen from where you keep it stored and let it slowly go up on one of the platinum wire coils. The smaller the diameter of the coils, the easier is to trap there the hydrogen. Of course you can try other methods also – the idea is to have hydrogen touch just one of the coils. Next, take some air and place it on the other coil – the same – try to trap bubbles of air on the coil.

After you succeeded all this mess with trapping bubbles of hydrogen and air to the platinum wire coils, look at the voltmeter. You will see the voltage rising. Wonderful! You have your first hydrogen fuel cell.

If you don’t have any hydrogen at hand I can teach you a trick. Place a 9-12 volt battery instead the voltmeter, just till you see hydrogen bubbles formed on the negative coil. Now place back the voltmeter and observe again the voltage. Now it is much higher as there are more bubbles of hydrogen and oxygen trapped on the platinum coils.

Scientists are working on discovering new catalysts which can be used instead of platinum. Till now graphite was promising to successfully replace the platinum and also some scientists claimed to have discovered a new molecular catalyst formed of nitrogen oxides. Even better, another team of scientists is working on replacing platinum with a special polymer.